He owns two motorcycles and a Toyota car. He has given a loan of Rs 59 lakh and also taken Rs 8 lakh 19 thousand 600 from the Citizens Investment Fund. There is also a credit card loan of Rs 18,000. Out of the total loan given, Rs 5 million is invested in shares of Madhya Tamor. As he is a founding shareholder, he has invested in ‘Share Advance’.
He has a TV, fridge, washing machine, computer, player, phone set, AC, iPad and sofa set worth Rs 1.41 million.
Adhikari owns 1,100 shares of industrial companies including Nepal Film, Bansbari Leather, Harisidhi Inta and Jyoti Spinning. Its total valuation is Rs 45,200. This is the cost price.
Adhikari has also bought shares of Nabil, Himalayan, Siddhartha, Bank of Kathmandu, Sunrise, Everest, Mega, Nepal Investment, NMB, Global IME, NIC Asia, Mero Micro Finance, Citizen Investment Fund and Premier Insurance. He owns 27,184 shares of the company. He has mentioned that its valuation will be Rs. 48 lakh 37 thousand 390. This is the cost price.
Adhikari has invested Rs 1.8 million in Nabil Balance Fund-2 and bought 27,929 shares of Chilime, HIDCL, Sanima Mai and Upper Tamakoshi. He has raised these shares from the secondary market. It is valued at Rs 4,017,500. This is the cost price.
Adhikari has 27 tola of gold jewellery and 50 tola of silver jewellery. 18,000 cash is in the house. He has stated that he has earned gold and silver from ancestral marriage and purchase.
He owns land in his and his wife’s name. In the former Sambu VDC, he owns land worth 27 annas, 3 paisa and 2 dams. 16 anna equals one ropani. It is in two parts. He has mentioned that he has bought land from sales of real estate in Biratnagar, loan and savings. Its cost is Rs 1.7 million.
There is also land in Chappi, Lalitpur. One plot is 4 ropani 10 anna and the other is 2 ropani 15 anna. Similarly, another land is 2 ropani 6 anna. Its cost is Rs 9 million 97 thousand. He has also bought land in Hetauda. There is a land in the Surunga, Jhapa. Besides, there are 2200 square feet of land. He has amassed this wealth through borrowing from the provident fund, bank loans and savings. The property is in the name of Mrs Sarita Adhikari Pokharel. 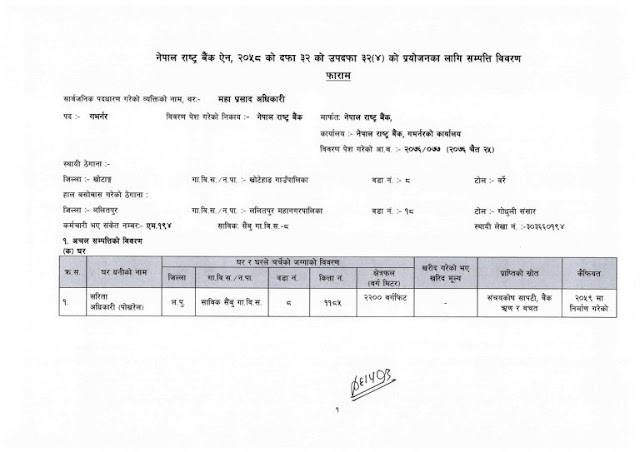 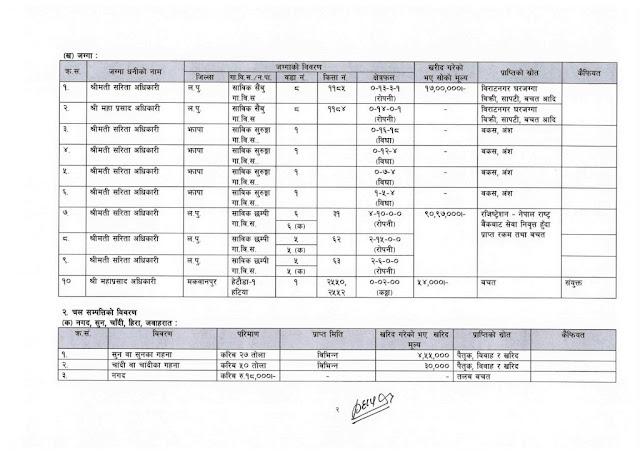 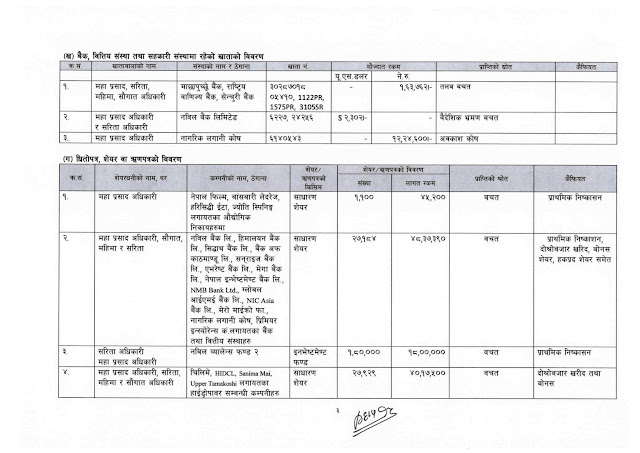 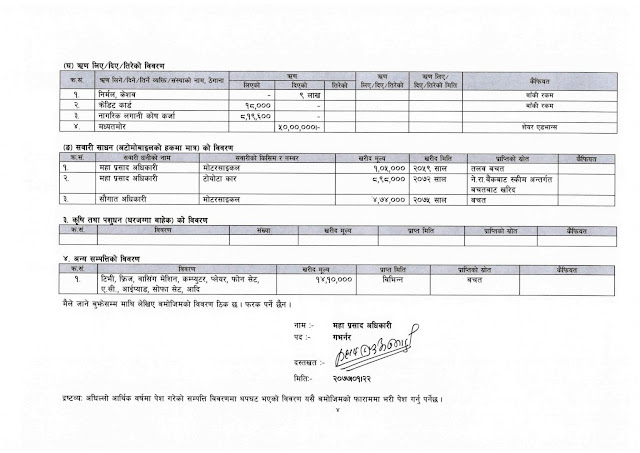